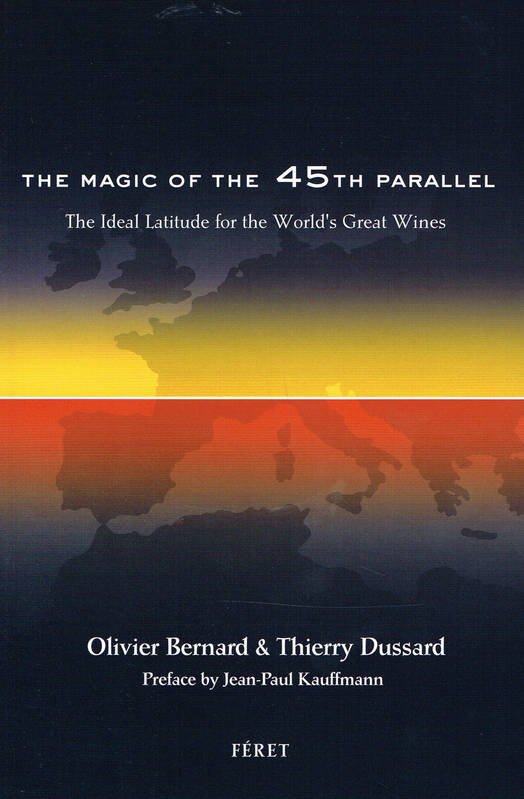 The magic of the 45th parallel (english version)

The magic of the 45th parallel (english version)

The Ideal Latitude for the World's Great Wines

Indisponible
A magic band surrounds our planet between the 40th and 50th parallels of the northern hemisphere. Within this mysterious space, wine finds the ideal conditions for revealing the true expression of the soil and climate in its fruit and the imprint of each successful vintage.
The 45th latitude, mid-way between the North Pole and the Equator, is the dividing line for wine, most white grapes being grown north of it and red grapes south of IL It thus represents a balancing point and a high-tension wire. This is the foundation from which Olivier Bernard has drawn the theorem of the 45th parallel.
After thirty years of tastings, travel and encounters, Bernard who heads the famous DOMAINE DE CHEVALIER in the Graves region of Bordeaux, wanted to jot down a few words about this magical line, where the climatic ideal for the great vintages is to be found. This was the starting point for the book he has written with Thierry Pussard, and to which twenty-six major witnesses have contributed their expertise.


From Haut-Brion to Romanée-Conti, from Portugal to Italy, does this theorem become universally applicable? It is indeed confirmed in the Caucasus, China and California, even if, in some cases, altitude becomes a substitute for latitude. But is it just as applicable to the same latitude in the southern hemisphere?
The wine luminaries who have contributed to this book, and who are among the most highly respected in the world, specify the influence of the 45th parallel in the creation of great wines suitable for long keeping. The vine-grower carefully chooses the varietals and density of planting, to which the slow and patient work of time is added, resulting in what is crucial in their eyes - balance.
The 45th parallel has become for wine what the Greenwich meridian represents to sailors, a point of reference for all lovers of great wines.
S'identifier pour envoyer des commentaires.